In a large early nineteenth-century former church – its previous life still evident from the grand organ situated above an elegant balcony – a group of people are ranged across plastic seating on tiers more usually occupied by orchestras in rehearsal. Some lounge in their seats in a pretence of relaxation, others crane forward eagerly for a better view of the keyboard, many clutch music scores. Below us are two beautiful gleaming Steinway concert grands, nose to nose like sleek racehorses. Players are called forward alphabetically and each person introduces their repertoire before sitting down to play. There’s an added frisson to today’s gathering because of the choice of pianos, a rare treat for these ‘piano nuts’ more used to playing at home on uprights or digital instruments (few have the luxury of space or money for a grand).

The performances are varied, some highly polished, a couple near-professional in their finesse and virtuosity, others are more tentative, a little hesitant as nerves get the better of the player and turn fingers trembly and the mind blank. But each performance is greeted with enthusiastic applause and there’s a palpable sense of community and collective experience.

I can’t remember exactly what I played at that particular gathering of the London Piano Meetup Group (LPMG), a club for adult amateur pianists which I co-founded back in 2013 when I was keen to meet others like me (being a pianist can be lonely!), but I do recall what Howard Smith played because it was by Satie, something of a rarity at LPMG events – and indeed in the concert hall. I’d not met Howard before, and I remember being struck by the sensitivity with which he played. Later, in the pub, we got talking and he admitted that he had felt very nervous playing in front of others, and had also found the advanced players quite intimidating. I assured him that he was not alone in feeling like this and that many of us were nervous (but had learnt to hide it!). We talked about the exigencies of practicing, the pleasures and the frustrations, and I discovered that Howard, like me, was a “returner” to the piano, and was working towards his Grade 6 exam. As we chatted, I sensed a quiet determination in him, to improve his playing, overcome his performance anxiety and connect with other pianists like us. Later, in an email, he told me he was writing a book about his experiences as an adult amateur pianist.

The world of the amateur pianist is a curious one – obsessive, often nerdy, richly varied, as our LPMG membership attests. We’re a mixed bunch – several doctors, an actuary, a video games designer, a retired OU lecturer, a handful of piano teachers – of mixed abilities players, from almost beginners to those who’ve had a formal musical training in conservatoire but who decided to take a different career path. Some have played the piano all their life, others have taken it up in retirement, or, like me and Howard, returned after an absence. But there’s one thing that unites us….

These are all people who absolutely confirm the true meaning of the word “amateur” – not maladroit, dilettante “Sunday pianists”, but people who absolutely love the piano. Eavesdrop on any conversation between members of LPMG and this love is more than evident as we discuss the myriad aspects of our obsession: practising, repertoire, exams, concerts, instruments, performance anxiety, favourite professional performers, recordings and more. Released from their living rooms, basements, and garden studios, where practicing is often undertaken in pleasurable solitary confinement, regular meetups allow these people to indulge their passion and share it with likeminded others.

“You’re all weird!” says my cycling-obsessed husband. But when I point out to him that I have encountered similar a passionate commitment amongst his cycling fraternity, he concedes that we are all “nuts” of one kind or another!

Amateurs may never touch the professionals, but they might just conceivably touch the audience with their fidelity and commitment to the piano and its literature. Sometimes the most hesitant performance can move because the audience knows the sheer amount of hard work, and anxiety, grit and determination, that has gone into preparing for that performance.

And it is this hard work – the practising and the striving, and a desire to improve, the sheer bloody-mindness to stick to the task  – which colours Howard Smith’s book ‘Note for Note’. 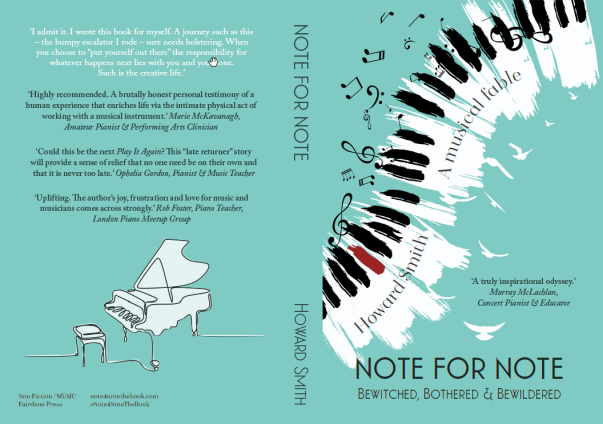 In part a memoir, ‘Note for Note’ is a Pilgrim’s Progress for the amateur pianist, and in it Howard charts the pleasures and the pitfalls, the breakthroughs and “lightbulb moments”, as well as the sloughs of despond when one can feel stuck in a rut due to lack of progress or having reached a plateau in one’s musical development with no clear way of moving forward. These are aspects which all pianists, indeed all musicians, whether professional, amateur or student, will recognise, and Howard describes the setbacks and the triumphs, small and large, in an engaging, candid and witty narrative. There’s an immediacy to his writing too, which reflects his excitement in the discoveries or progress he makes: those wonderful breakthroughs when one thinks “Oh yes, now I understand!”.

Having had some lessons as a child, Howard decides to revisit the piano in his retirement, throwing himself into his practising and musical study with all the dedication and passion that befits the word “amateur”. That Howard loves the piano is clear from the outset: beguiled by the instrument, its literature, those who play it, the practice of practicing, and the will to improve, he sets out on the rocky road to mastery, with the support of teachers, friends and other pianists (amateur and professional). The result is a remarkably honest book that will resonate with others on the same path and will provide inspiration and practical information for those who are just starting out on the journey.

But there’s more to this book than a straightforward ‘What Howard Did Next…..’. His intellectual curiosity and a voracious appetite for information lead him to explore music theory, harmony, improvisation and song-writing and all his discoveries are documented within the pages of the book. Such information is explained clearly, in some instances with diagrams, to assist the reader, and because it is presented from the point of view of someone who has only recently grasped the concepts, it is easy to understand and absorb. Thus, this book is also a primer for those interested in exploring harmony, and particularly jazz harmony, lead sheets and the building blocks of jazz improvisation, in more detail.

I sense courage in Howard too. It’s not easy to set oneself on a musical path such as this: playing for a teacher or in front of others at piano club or on a course, and taking practical music exams are perhaps the hardest things for the amateur pianist, yet Howard’s willingness, tempered with a healthy dose of humility, to “just do it” (to quote a famous advertising slogan) is admirable and inspiring.

This personal testimony, written by someone who understands both the daily practicalities and exigencies of learning a musical instrument and who also has a deep appreciation of the art and craft of music, regardless of genre, is a celebration of the wonderfully enriching experience, both physical and emotional, that music brings to so many people – as players and practitioners, teachers and listeners.

Above all, this book is a love story – for the piano and those who play it, and music and musicians in general.

‘Note For Note’ is available to order via Amazon

This site is free to access and ad-free, and takes many hours to research, write, and maintain. If you find joy and value in what I do, please consider making a donation to support the continuance of this site

1 thought on “Note For Note: A Musical Fable – by Howard Smith”